Did you all enjoy your extra long weekend & catch up on your much needed rest?  I'm referring to Saturday, that looong day.  If you don't know what I'm talking about (& people rarely do) there was a leap second inserted between 11:59:59 pm & midnight.  I hope you took advantage of it!

“Take a frown & turn it upside down”--isn’t that so cute you could just “fwow up”?  But--you CAN make a bad situation better!


When Matt was about 8, a friend of ours had to have part of his colon removed.  Matt (our comedian in training) asked if that meant he would be left with a semicolon.


I was about 3 & my brother 5 when my grandfather took us to the park.  Grandpa was sitting on a bench, reading a newspaper, while my brother & I went to feed the ducks in the lake.  I leaned over a smidge too far & fell in.  My brother ran to get our grandfather & before they could get back, a stranger had pulled me out.  I developed a fear of the water & didn’t learn to swim until I was a teenager.  On one of our first trips to Hawaii, Bud & I went swimming with dolphins.  The Kahala Hilton Hotel had a large lagoon which was used as a “storehouse” for the local Sea World.  It was fun—more so for Bud than me.  Dolphins are much too fast to catch.  To interact with them, you had to float quietly until they came up to you.  I couldn’t float—he could.  He was able to grab a dorsal fin & the dolphin took him for a ride!  I was so jealous that when we got home I took swimming lessons at the YMCA.


An even better dolphin encounter:  Our son, Blake, is a drug dealer rep for a pharmaceutical company.  He won a contest at work.  The prize—I AM SO JEALOUS—was private time with the dolphins for him & his wife at facility in Florida!  Below is a video of their session.  It looks like so much fun!!

You can even learn to be a nicer person.  This is one of my favorite jokes:
Sadie & Molly, two old friends who haven’t seen each other in years, meet on the street.  Their conversation goes like this:
SADIE: Molly, it’s so good to see you again!  How are you & your family?
MOLLY: I’m just fine, thank you.  My husband retired & his company gave him a million dollar bonus.  We’ve been travelling around the world!
S: Fantastic!  And what about your son?
M: He became a doctor.  He’s now Chief of Staff at Johns Hopkins.
S: Fantastic!  And your daughter, how’s she doing?
M: She married a lovely man.  He’s rich, so they live in a mansion & she has a    live-in staff to take care of her every whim.
S: Fantastic!
M: But enough about me—what have you been doing?
S: I went to charm school.
M: You went to charm school?  What did they teach you?
S: You know how I used to say “bullshit” all the time?  They taught me to say “fantastic” instead!


Twenty plus years ago I was called for jury duty.  While there I slipped on the marble floor & broke my left thumb. It was in a splint & I couldn’t put on a necklace or button my right cuff.  Bud left for work before I got up, so I asked another prospective juror to help me.  I would hold out my right arm & say, “Please dress me, Mommy.”  She did, & we clicked.  We became best friends--& still are.

We’d be happier if we all had this attitude: 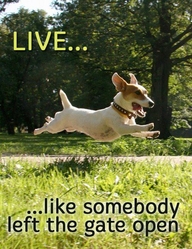 While in Acapulco I went parasailing.  I took off from--& was supposed to land on—a raft.  I missed the raft & landed in the water.  I could swim pretty well by then & I could float.  I was wearing a life vest & the water, which I had softly “floated” into without a splash, was the same warm temperature as the air.  This must be what it feels like in the womb.  The guys on the raft were yelling, “Don’t panic—we’ll be right there!!” & I was peacefully calling back, “I’m fine.  Take your time!”
I’ll leave you with this video to enjoy.  It has lots of good advice!