When our youngest son, Blake, got married, he & his wife eloped to Las Vegas.  Not to sneak by us—we loved his wife--& still do.  I guess they didn’t want all the fancy trappings that go with a formal wedding.  Soon after their return we threw them a wedding reception.  I decided I had a right to see them get married, so I performed a wedding ceremony.  (No, I am not a minister.)  It was short & went something like this: “Dearly beloved, we are gathered here today to reunite this man & this woman in holy matrimony.  Please join hands.  Diane, do you promise to love & honor Blake & to let him have the TV remote control?  ‘I do.’  Blake, do you promise to love & honor Diane & to put the toilet seat down?  ‘I do.’  I now re-pronounce you husband & wife.  You may kiss the bride!”  They were later married (again!) in a Catholic church in Florida, where her family lives.  We had not met her family before.  At the reception at her sister’s home her father told me that he & his wife loved our Blake the first moment they met him.  Sometimes I don’t know what I’m going to say until it comes out of my mouth.  What came out was, “Really?  What do you think of him now?” 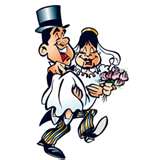 I was Christmas shopping one year & found the perfect T-shirt for Blake.  It had a picture of a TV remote control on the front & said, “It’s a man thing!”  I told the saleswoman I’d like one in an extra-large.   She didn’t have any under the counter so she called across the busy store to a stock boy, “I need a ‘man thing’ in an extra-large!”  The woman behind me in line said, “Don’t we all?”  Cracked up the whole store!
He & his brother once bought me a VERY LARGE toy stuffed reindeer for Christmas.  They bought it in San Francisco & brought it down on the plane with them.  It was too large to be wrapped & they didn’t want to send it through baggage.  It wouldn’t fit in the overhead & they didn’t want to have it in their laps, so they did the only reasonable (?) thing.  They bought him a ticket.  “Rodney” was strapped into a seat & a passenger asked the flight attendant if she would move him so he could sit there.  She laughed & told him, “I’m sorry, sir, but the reindeer has a ticket.”  They showed me their copy.  On it was “Passenger’s name: Reindeer, Rodney”.

My family has always expressed emotion physically.  We practically kissed each other goodbye when we went to the bathroom.  I had to teach my husband to become a “hugger” when we got married.  (He already knew how to kiss.)  I guess I created a monster.  When Blake was about 2, I was standing at the sink preparing dinner.  (YES, I used to make dinner!)  He pointed to my leg & asked, “Dat yours?”  I told him yes.  He pointed to my arm & said, “Dat yours?”  Yes, again.  He then pointed to my breast & asked, “Dat Daddy’s?”

Blake was 49 this year.  I am 36.  The best way to explain this anomaly is to tell you about something that I read in one of Kirk Douglas’ books.  A “senior” movie actress was being interviewed.  The reporter said, “Forgive me, Madame, but I have to ask.  Your son (who was also a star) admits to being 56.  You claim to be 63.  How can this be?”  Her answer (& mine): “He has his life—I have mine!”