VOTE "YES" ON PROPOSITION "NO"!

Some political humor for today, although there'll be plenty tomorrow!

But first, a question:  How come we choose from just two people to run for president and fifty for Miss America?

Actually, I don't approve of political jokes.  I've seen too many of them get elected.

But I just can't resist, so:

A busload of politicians were driving down a country road when all of a sudden, the bus ran off the road and crashed into a tree in an old farmer's field.  The farmer, after seeing what had happened, went over to investigate.   He then proceeded to dig a hole to bury the politicians.  When the local sheriff came out & saw the crashed bus, he asked the farmer where all the politicians had gone.  He told him he had buried them.   The sheriff asked the farmer, "Were they ALL dead?"  He said, "Well, some of them said they weren't, but they were politicians & I didn’t believe them!"


A quote from Bette Midler:
"I haven't left my house in days.  I watch the news channels incessantly.  All the news stories are about the election.  All the commercials are for Viagra & Cialis. Election, erection, election, erection--either way it's about getting screwed!"

Maybe we should try this: 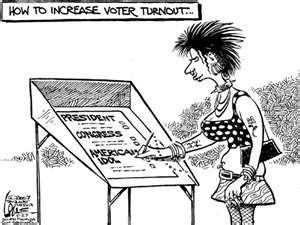 We should ALL read this:


The following was written by State Representative Mitchell Kaye from Cobb County, GA:

We, the SENSIBLE people of the United States, in an attempt to help everyone get along, restore some semblance of justice, keep our nation safe, promote positive behavior & secure the blessings of debt-free liberty to ourselves & our great-great-great grandchildren, hereby try one more time to ordain & establish some common sense guidelines for the terminally whiny, guilt ridden, basically lazy people.  We hold these truths to be self-evident:

ARTICLE l.  You do not have the right to a new car, big screen TV or any other form of wealth.  More power to you if you can legally acquire them, but no one is guaranteeing you anything.

ARTICLE ll.  You do not have the right to never be offended.  This country is based on freedom, & that means freedom for everyone--not just you!  You may leave the room, change the channel, express a different opinion, etc., but the world is full of idiots, & probably always will be.


ARTICLE lll.  You do not have the right to be free from harm.  If you stick a screwdriver in your eye, learn to be more careful.  Do not expect the tool manufacturer to make you & all your relatives independently wealthy.

ARTICLE V.  You do not have the right to free health care.  That would be nice, but from the looks of public housing, we're just not interested in health care.

ARTICLE Vl.  You do not have the right to physically harm other people.  If you kidnap, rape, intentionally maim or kill someone, don't be surprised if the rest of us want to see you fry in the electric chair.

ARTICLE Vll.  You do not have the right to the possessions of others.  If you rob, cheat or coerce away the goods or services of other citizens, don't be surprised if the rest of us get together & lock you away in a place where you still won't have the right to a big screen color TV or a life of leisure.

ARTICLE Vlll.  You don't have the right to demand that our children risk their lives in foreign wars to soothe your aching conscience.  We hate oppressive governments & won't lift a finger to stop you from going to fight if you'd like. However, we do not enjoy parenting the entire world & do not want to spend so much of our time battling each & every little tyrant with a military uniform & a funny hat.

ARTICLE lX.  You do not have the right to a job.  All of us want you to have one, & will gladly help you along in hard times, but we expect you to take advantage of the opportunities of education & vocational training laid before you to make yourself useful.

ARTICLE X.  You do not have the right to happiness.  Being an American means that you have the right to pursue happiness, which, by the way, is a lot easier if you are unemcumbered by an overabundance of idiotic laws created by those of you who were confused by the Bill of Rights.

As they say in Chicago, "VOTE EARLY & OFTEN"----fishducky