I'm thinking of freshening up our front door area with a new doormat. I found some wonderful ones.  Which do you prefer? 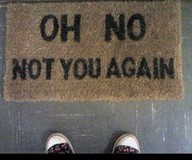 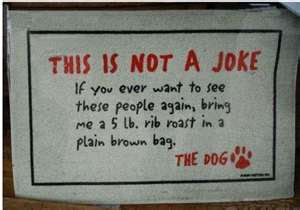 I’m sort of leaning towards this one.
It sounds businesslike: 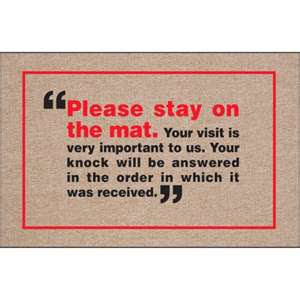 When our boys were very small they shared a room.  Their twin beds were against the walls in the shape of an “L”.  The head of Matt’s bed was next to the bedroom door.  He liked to swing the door back & forth.  Sometimes (apparently more often than I realized) it would hit the wall.  One day he called us into his room to show us his “accomplishment”.  He pointed out where he had rammed the door into the wall so many times that there was now a hole in the wall.  He proudly said, “Look!  I made a space for the doorknob.”  He did not take up decorating as his career.

Speaking of decorating, or redecorating, for those of you who want to change wallpaper, here’s something you might try.  (Strangely enough, I don’t believe Martha Stewart has ever suggested this.)  A friend of ours—NOT Bud—we’ll call him “Daddy”—had been to a party the night before & was quite hung over.  Early in the morning, he was awakened by his very young son calling “Daddy!”  He yelled at his son to go back to sleep.  Again, “Daddy!”   Again, “Go back to sleep!”  Over & over, until the boy stopped.  His son’s problem was that he had to go potty, specifically, to pee.  A lot.  Since his father was no help, he had to solve his problem himself.  So he did.  He lowered his pajama bottoms & diaper & peed on the wall.  Then, to his amazement, he discovered that his urine had loosened the wallpaper.  All he had to do to peel it off was to scrape it with his fingernail.  So he did.  When “Daddy” was finally able to get up he went into his son’s room & found a section of wallpaper-less wall about 3 feet square.  As I said, you could try this, but you’d probably have to get your husband to reach the higher places. 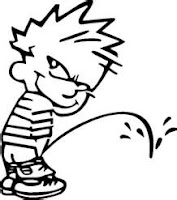 Not another handy hint, but the last story brought back memories of my daughter’s toilet training days.  (She is 52 now & completely trained.  This incident happened a while back.)  I tried very hard to stop swearing when she started to talk & was reasonably successful.  Unfortunately, I cut my finger badly while I was preparing dinner.  I reflexively said, “Shit!”  I guess she heard me.  She then went to use the potty by herself.  She tried to urinate standing up.  After all, if her daddy could do it, why couldn’t she?  Then she found out why.  Her little legs were all wet.  She said “Shit!” just as her daddy was getting home from work & walking by the open bathroom door.  He told her that we don’t talk that way in our house.  She said, “Mommy does!”
And that, of course, made me remember another swearing story.  When Blake was about 2, his sister was about to transition, or “cross the bridge”, from Brownies to Girl Scouts.  I was her Brownie leader.  I decorated a mirror with a bridge & some Brownie figures.  Blake saw it & said, “Dat pwetty.”  I said, “Thank you.”  He asked, “Dat fo’ us?”  I said, “No.  It’s for the Brownies.”  He lowered his head & walked away mumbling, “Ev’wy damn t’ing in dis house fo’ Bwownies!”

Until next time---- fishducky