I used to play golf every Friday with some of my friends.  We COULD still play--we’re still physically able to reach down & get the ball out of the hole—it’s just that getting up again has become difficult.  We played in an area that was long ago inhabited by an Indian tribe so Barbara gave the three of us “Indian” names.  She couldn’t ever remember where her ball landed so she called herself “Brain of Sieve”.   Charlene, who could spot (& remember) where anyone’s ball went was “Eye of Eagle”.  I, for some f**king reason, became “Mouth of Sewer”.  I was never a great player, but I DID speak fluent golf! 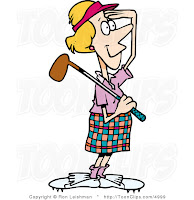 Sometimes other friends would join us for 9-hole pitch & putt golf.  Our scores were recorded on the scorecard after our initials.  There was Amy, Barbara, Bernice, the “lene twins”, Char & Ar  (who were not related but just happened to be named Charlene & Arlene) & me.  No matter how hard I studied or how well I played, everyone else got an A, B or C & I always got an F.  Maybe I should have been an aardvark instead of a fishducky.

The pitch & putt course was near a home for retired actors so we saw a lot of celebrities playing there.  One day we were playing in a group behind Jack Nicholson.  He had forgotten his club & left it on the green.  I returned it to him & he smiled that devilish smile & touched me when he thanked me!  I haven’t washed that shoulder since.  Blake Edwards’ (the producer who was married to Julie Andrews) father was a regular.  I give him a lot of credit for playing—he was in his late 80’s & you had to walk the course—but you didn’t want to play behind him.  His walk reminded me of Tim Conway when he used to do his “little old man” routine on the Carol Burnett show.  Fortunately, he would allow people to play through.  This video has nothing to do with golf, but it shows the way he walked--& it’s FUNNY!!!

Barbara & I & our husbands took an Alaskan cruise.  She & I played virtual golf on board the ship one day.  Assisting us was a prim & proper young British crew member, who will be known as Reggie.  (Let me explain what virtual golf is.  You swing a real golf club & hit what is essentially a “whiffle” ball.  The ball hits a screen showing a golf course.  Your ball shows up on the screen at the spot it “landed” on the course.  You hit your next shot from there.)  We played with borrowed, ill-fitting men’s clubs.  I hit my first shot & I can’t find it.  Reggie tells me, “Madam, it’s by the tree”.  Barbara hits hers & can’t find it.  Reggie says, “Madam, it’s in the sand trap.”  Reggie asks us if we’ve played before.  We tell him, “Of course—we play regularly!”  I hit again.  He locates it.  Barb hits again.  “Madam, it’s behind the clubhouse.  Just hit it over the clubhouse.”  She hits it again & asks where it went.  A very exasperated Reggie sighs deeply & says, “Madam, I haven’t the vaguest idea!”

I'm not normally a fan of David Letterman, but I LOVE this "Top Ten" list!

10. A below par performance is considered good.

9. You can stop in the middle & have a cheeseburger & a beer.

8. It's much easier to find the sweet spot.

6. You can still make money doing it as a senior.

5. Three times a day is possible.

4. Your partner doesn't hire a lawyer if you play with someone else.

3. If you live in Florida, you can do it almost every day.

2. You don't have to cuddle with your partner when you're finished.

And the NUMBER ONE reason why golf is better than sex...

1. When your equipment gets old you can replace it!!

There's really no reason to put this here.
I just felt like dancing.

I could never understand why we weren't asked to join the pro tour!----fishducky