WE’LL MEET YOU AT THE AIRPORT

HAPPY NEW YEAR!!  Want to come with us on the trip of a lifetime?  You have the day off tomorrow, don’t you?  Pack your (virtual) bags & join us on our travels through the Orient.  We took this trip in 1980.  We went with our friends, Joe & Helen.  Joe, like Joe E. Lewis, had been rich & he had been poor. (As Joe E. Lewis said, “Rich is better!”)  When our Joe was rich he traveled strictly first class, so on this trip, we did, too!


The trip started with a JAL (Japanese Air Lines) flight from Los Angeles to Tokyo.  Maybe.  My husband claims it was Singapore Air Lines.  I can’t remember, but he’s usually right.  It was an overnight flight, so after a wonderful dinner—a roast carved right in front of you—we watched a movie & then were shown to our bedrooms.  YES, I said bedrooms!  It was the only time we ever had real beds & not reclining seats on a plane.  At the hotel, we opted to take Japanese style rooms.  We slept on futons on the floor.  I had a marvelous night’s sleep & woke up refreshed & raring to go.  I swung my legs over the side of the bed (forgetting I was on a futon), put my feet on the floor & found my knees right next to my head!  We took a cab tour/shopping trip through the city.  The cherry blossoms were in bloom.  Beautiful!  I don’t know if they still do it, but the cabs drove with their lights on.  When they were stopped at a red light they turned them off. 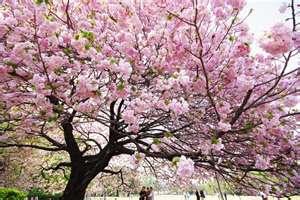 From Tokyo we flew to Singapore, where we stayed at a suite at the Holiday Inn.  The Holiday Inn is not first class, you say?  WRONG!  This suite came with a personal butler.  How lovely it was to spend the day shopping (Helen & I took a local bus.  We figured it would be fun even if we got lost, which we didn’t.) & then come back to our suite, take off our shoes & have the butler take our packages & pour us a glass of wine.  Joe & Bud stayed in the room one day playing gin rummy while we shopped.  There were prostitutes available & Joe wanted to hire a couple of them.  Not for sex—he thought it would be funny to have two women sitting there naked, watching our two guys playing cards, when we got back.  Good thing he didn’t—I’m not sure how funny Helen or I would have thought it was.  Below is a picture of apartments flying the “Singapore National Flag”.  That’s right—it’s laundry drying!  Look at how spotless the streets are.  Also, here’s a picture of a small shrine on a street in Singapore. 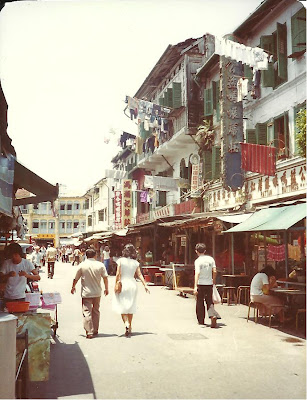 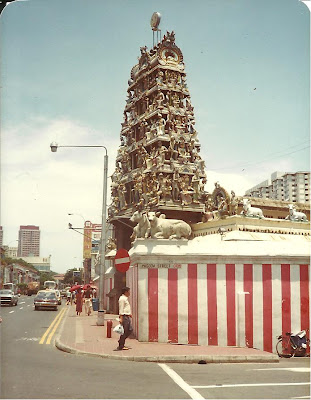 We took the ferry to Hong Kong.  I think it cost less than 25 cents per person, American money.  Hong Kong was a shopper’s paradise.  In one of the MANY jewelry stores, I fell in love with a delicate gold & jade bracelet.  I can’t remember what they were asking for it, but it was probably around $1,000—way out of our price range.  They expected you to bargain in these stores, but I am not a bargainer.  Bud is.  After lengthy negotiations, he told them he would pay no more than $400.  They countered with $410.  He told them $400 was his final offer.  They asked if he was going to let a mere $10 keep his wife from having this bracelet that she so obviously loved.  He said “Yes” & we walked out of the store.  They came running after us.  Bud won—or I guess I did—I got my $400 bracelet!   At that time, Hong Kong had a couple of department stores run by the communist government.  Their prices were unbelievable.  There was no bargaining, nor was any necessary.  Bud got a few silk neckties & I bought a pair of 100% silk pants & 2 embroidered “pictures”—all for around $1 each!  We also took a bus tour of part of China—a difficult thing to do at the time because of politics.  I remember visiting a kindergarten (the children were adorable) & being served warm beer.  Below is a picture of busy Hong Kong harbor. 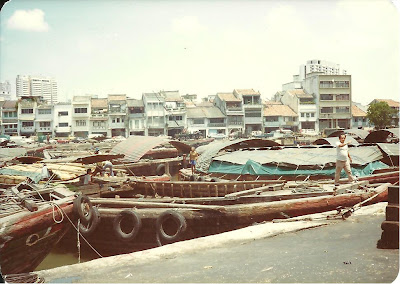 Our next stop was Manila, where we stayed in the Douglas MacArthur suite of our hotel.  I’m not used to the life of a plantation slave owner, so I was uncomfortable with the fact that we had a houseboy who slept on the kitchen floor.  Manila seemed to have only the very rich or the very poor—no middle class.  If you were poor, you lived on the street (literally) & begged.  If you were rich, your world was filled with beautiful places that Ferdinand & Imelda Marcos had built.  We found it depressing.
From there we went to Thailand.  There were many signs in the airport warning travelers to watch out for pickpockets & con men.  (We got a call at the hotel from a man who identified himself as our driver & told us our car was ready.  That would have been fine, except we hadn’t ordered a car!) We had dinner in the penthouse restaurant of our hotel.  The maître d’ seated us & handed each of us a menu.  He returned in a couple of minutes & very apologetically took my menu & Helen’s & gave us new ones.  We couldn’t understand why until Joe explained it.  We had originally been given “host” menus—with prices—instead of “guest” menus—with no prices.  Neither Helen nor I had noticed there were prices on ours!  Thailand was fascinating.  We saw Buddhist monks with their shaved heads & colorful robes.  We saw the palace of the king of Siam.  It was being renovated & was covered in scaffolding & it was still the most beautiful building I’d ever seen.  The outer walls were covered by thousands of tiny mosaic tiles.  We rode a bus (motorboat) down one of the many canals & went to an elephant market.  Below are pictures of Bud, me & Helen in front of the palace & Joe looking at a baby elephant being offered for sale at the market. 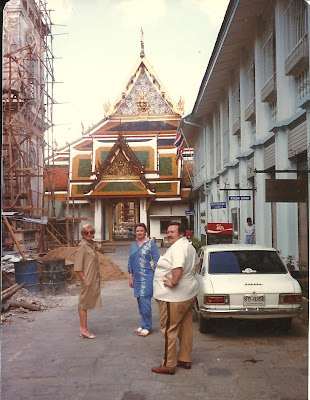 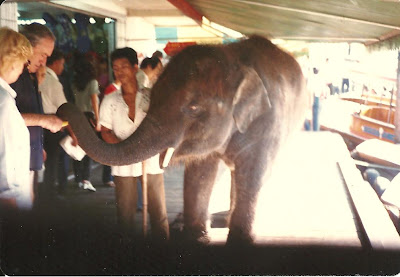 A reminder from Fozzie Bear not to over-imbibe tonight: