WHAT ANIMAL SHOULD I WRITE ABOUT?

Probably the world's oldest duck joke: A duck walks into a pharmacy, and asks for Chapstick. The cashier says, "Cash, check or charge?" and the duck says, "Just put it on my bill." 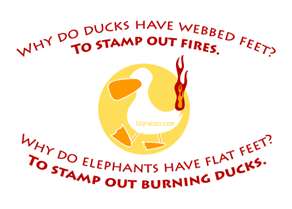 Two other oldies but goodies:

Two I hadn't heard before:

A circus owner walked into a bar to find everyone crowded about
a table watching a little show. On the table was an upside-down pot
and a duck tap dancing on it. 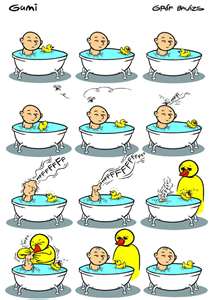 For my deep thinking readers:﻿

Q: Why did the duck cross the road?
A: The chicken had the day off.

Q: Okay, why DID the duck really cross the road?
A: We called in some consultants:

PLATO: For the greater good.
ARISTOTLE: It is the nature of ducks to cross roads.
KARL MARX: It was a historical inevitability.
TIMOTHY LEARY: Because that's the only trip the establishment would let it take, man.
CAPTAIN JAMES T. KIRK: To boldly go where no duck has gone before.
MARTIN LUTHER KING, JR: I envision a world where all ducks will be free to cross roads without having their motives called into question.
MOSES: And God came down from the Heavens, and He said unto the duck: "Thou shalt cross the road." And the duck crossed the road, and there was much rejoicing.
RICHARD M. NIXON: The duck did not cross the road. I repeat, the duck did NOT cross the road.
FREUD: The fact that you are at all concerned that the duck crossed the road reveals your underlying sexual insecurity.
BILL GATES: I have just released the new Duck 2013, which will not only cross the road, but will lay eggs, file your important documents, and balance your checkbook. It is not compatible, however, with Duck  2009. Or Macintosh.
OLIVER STONE: The question is not, "Why did the duck cross the road?" Rather, it is, "Who was crossing the road at the same time, whom we overlooked in our haste to observe the duck crossing? And what about the grassy knoll?"
DARWIN: Ducks, over great periods of time, have been naturally selected in such a way that they are now genetically predisposed to cross roads.
EINSTEIN: Whether the duck crossed the road or the road moved beneath the duck depends upon your frame of reference.

Several years ago my friend Bonnie & I went to the Kentucky Derby.  Her nephew flew us from there to Memphis.  There are two main tourist attractions in Memphis; Graceland & the Peabody Hotel.  You probably know all about the first, but not the second.  If you're a duck fancier--or a fancy duck like me--you'll enjoy this video:

This may--or may not--be the funniest duck joke ever, but Buddy Hackett really knew how to tell 'em:

To paraphrase Chevy Chase on the old Saturday Night Live show--I'm fishducky & you're not!