Let’s talk about cars & driving & stuff like that.  You go first.
OK, I’ll start, but feel free to jump in any time.  Let’s begin with a rude joke:
Yo’ momma’s so fat, her driver’s license says, “Picture continued on other side.”


I saw a sleek sports car on the road with the license plate WAS HIS.  It could have belonged to a couple named Wendy Ann Smith & Harold Ignatius Smith, but I prefer to think that she got it in the divorce settlement.
This actually happened: A Chinese tourist went to court in California to protest a parking ticket.  The State claimed he parked his car in a “No Parking” zone.  He brought a picture of the area to show that he had parked legally—that there was even a sign that invited him to leave his car there.  The picture showed his car directly under a sign that said “FINE FOR PARKING”.  It’s just possible there was a language problem.

This probably didn’t:  A car carrying 4 Texans is pulled over for speeding.  The cop asks the driver if he saw the speed zone sign that he had just passed.  The driver says, “Yeah, I saw it!  It said ‘Speed zone 25 miles a head.’  I figured there was 4 of us so we could go 100 miles an hour.  We wasn’t going anywhere near that!”

I got this in an email, so it MUST be true:

I would like to share a personal experience with my closest friends about drinking & driving.  As you well know, some of us have been known to have had brushes with the authorities on our way home from an occasional social session over the years.  A couple of nights ago, I was out for an evening with friends & had a couple of cocktails & some rather nice red wine.  Knowing full well I may have been slightly over the limit, I did something I've never done before--I took a cab home.  I passed a police roadblock, but since it was a cab, they waved it past. I arrived home without incident, which was a real surprise, as I have never driven a cab before & am not sure where I got it or what to do with it now that it's in my garage!

Are your kids driving yet? 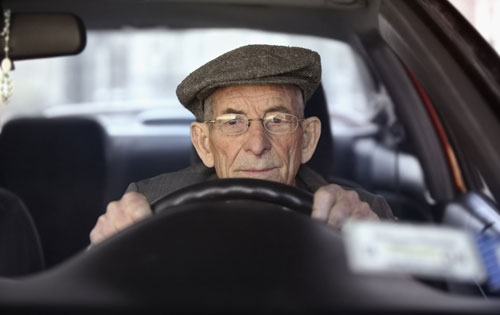 He thinks so, too! 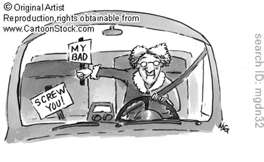 Beware of all of us geezers!

AND WATCH THE ROAD!! 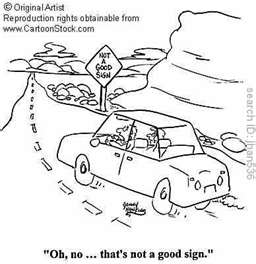 I wrote the following post last year.
Inger at desertcanyonliving.blogspot.com published it 1/19/12.﻿

I love to drive!  My first Mustang, which I think was a ’69, was the first car I had which my husband hadn’t driven for years prior to my driving it.  It was also the first car I had which (deliberately) could not hold a troop of Boy or Girl Scouts.  The government had a ban on manufacturing convertibles at that time because of safety concerns.  There were, however, no laws about making your own convertibles.  We had the car decapitated & a convertible top put on! Once I was driving about 4:00am on a virtually deserted freeway when I glanced at my speedometer.  I was going 105!  I reluctantly slowed down.

My husband, Bud, drives slightly differently.  I have accused him of being a graduate of the HELEN KELLER SCHOOL OF DRIVING.  He is apparently more comfortable driving by Braille, because he is constantly on the Bott’s dots (the little reflective markers used to separate lanes) so he can feel his way along the road.  He used to travel.  When he was out of town, I would sometimes drive over the dots so I could pretend he was still home.

I could never understand why men doubt women’s ability to drive.  Once, when I was backing out of a parking space at Sears, a very SIMPLE thing to do, I noticed a man standing behind me, directing me & waving me on.  He said, “Plenty of room, lady!”  I wanted to kill him!  If I had, I’m sure a jury (of women) would have found sufficient cause to set me free.

Another example:  I drove through a very narrow, twisty entryway into a crowded parking lot. The attendant told me they were full.  I asked him if there was someplace I could turn around & he told me there wasn’t—I would have to back out the way I came in.  I told him OK & put the car in reverse.  He started to give me a lesson on how to back my car out.  I leaned out the window & said, “No problem—I used to drive race cars for a living!”  A total lie, but who cares?

Around 1975 we bought a condo on Maui.  A client of Bud’s gave us an old VW bus & had it shipped over.  My kids & I brush painted it Yellow Cab yellow & covered it with cartoon drawings.  (How often do kids get to paint pictures on a car WITH the owner’s permission?)  On the front it said, “Holo holo duck” (wandering around duck) & had my fishducky picture on it.  I was taking the kids from Kaanapali to Lahaina one day & stopped at a hotel to pick up a friend.  A lady approached & asked if this bus goes to Lahaina.  I told her it did.  She asked the cost & I told her it was a free shuttle.  I drove her to Lahaina.  She may still be there waiting for a ride back.  If you see her, tell her we went out of business.

And one more "funny" for the road: