BE ON THE LOOKOUT! FISHDUCKY’S BRAIN HAS ESCAPED!!

I was about to go into my house when a lady walking a beautiful black lab passed by.  The dog seemed friendly so I asked if I could pet him.  The woman said, “Yes--BUT NO JUMPING!”  I told her I won’t if he won’t.  Neither one of us did.

The other day I saw a cat lying on its stomach across the street.  It had its paws over its head, shielding it.  It was being attacked by jays.  It must have been a very bad cat.  Or a wimp.  We have to take care of our cats—they don’t grow on trees, you know!  Although I saw one that thought it did.  I happened to glance up at a very fully-leafed tree & saw a cat’s head sticking out like an apple.  Not a hint of the body could be seen—just the head! 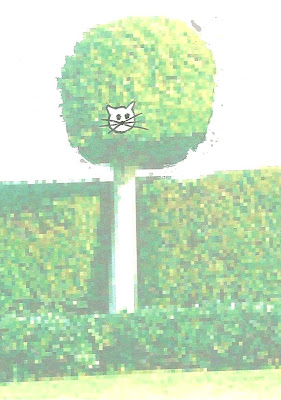 ...If someone were to actually move heaven & earth, where would they put them?
...Why aren’t rite, right & write pronounced differently from each other?
...Why does “scan” mean both to read something quickly & to examine something carefully?  And do you have to “dust” after you “dust”?


And some you CAN answer:

(If you need help, answers are at the end of this post.)

And now for something completely different, as they used to say on Monty Python.  (Hey, I’m fishducky—what did you expect?)  My folks were in Las Vegas & were about to see a show called “Boylesque”.  The cast was comprised wholly of female impersonators.  A waitress was taking drink orders & my mom asked her how the show was.  The waitress (who was obviously working in the wrong place) said, “It’s fine, if you like that sort of thing.”  My mom & dad stayed for the show & decided they did like that sort of thing.  Bud & I saw it later & it got me very upset.  Not that the show wasn’t great—it was!  What bothered me is that some of the female impersonators were prettier than me—even while they were stripping!

As long as I’m babbling rambling can’t seem to stay on one subject today, let me tell you about our daughter, who, as I have said, wishes to be nameless.  When Nameless was very young (no more than 4) she was in a car with my mom & dad.  She seemed to be reading aloud the names of streets & stores as they passed by them.  They assumed she had memorized them.  They realized she was actually reading when they got on the freeway.  The sign said “SAN DIEGO FWY” & that’s exactly what she read—pronouncing it “San Diego Fwee”.


If you’re confused by this post, think of how I must feel----fishducky