AT LAST—A SOLUTION TO MY PROBLEM!

I’ve found a solution to my major problem, & to think it came from that smartass know-it-all genius Bart Simpson.  Even a used brain would be fine, but I don’t have access to pathology labs.  Can anyone help me?  Here’s all we would have to do:

Or maybe I don’t really need one.
He seems fine:

I was taking my shower this morning & I got to wondering (now you see why I want that brain) if everybody washes their body in the same order or is it just me?  I got in the shower, took my sponge in my left hand & washed the entire right side of my upper body.  (I’m left handed so I always wash my right side first.)  Then I switched the sponge to my right hand & washed my upper left side.  Back it went into my left hand & I washed my right leg, then back again for my left leg.  Am I the only one who does this—which wouldn’t surprise me—or do normal people have a set routine for bathing, too?

Speaking of wanting and/or needing a brain, my father’s lady friend, Dorothy, was not the brightest light in the chandelier.  She & my dad were with us when we took the entire family on an Alaskan cruise.  On the cruise with us, but NOT as our guests, were Lady Bird Johnson, (the widow of President Lyndon Johnson) & her contingent of Secret Service agents.  Prior to setting off, everyone had to attend the lifeboat drill.  We were standing next to Mrs. Johnson during the drill.  Her face was apparently familiar to Dorothy, who turned to her & said, “I KNOW you from somewhere!  Are you a customer at Steve’s Beauty Salon in Hollywood?”  Mrs. Johnson sweetly replied, “No, dear—I’m from Texas!”

This is the patch we had made
& put on jackets & caps: 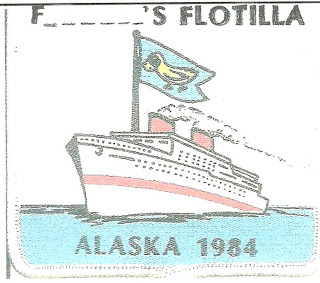 Another example of someone who could use a brain insertion: My dad used to work in my uncle’s grocery store.  One day a man came in & asked for half & half.  Nothing odd about that, right?  WRONG!  He pronounced it “HAFF & HOFF”!  Maybe he had ONE British parent.
And someone I WISHED had a brain (& a heart): Bud & I ran the local Cub Scout pack.  At an assembly in the school auditorium we asked each boy’s parents to register & to tell us what they could do to help.  The attorney father of one boy wrote on his slip, “Can’t help.  Work full time.”  Our boys were then 8 years old—nobody we knew was yet retired!  He refused to even give us his phone number in case of an emergency.  His son was in my den.  We held our meetings in the evening.  One evening it was pouring rain—much too heavy for the boys to come over.  We called everyone but him to cancel.  His dad buzzed by & dropped him off before I could catch him.  His son had to call him for a ride home.  Later that evening I got a call from his father, who was irate.  He yelled at me for making him go out twice in the storm when there wasn’t even a meeting that night!  How inconsiderate of me!!

This is my great niece's cat, Butter, & her brother's post.
I think it's pretty funny--check it out:

"I know there is a dog on the logo but the beer is just so damn good!"

One thing I CAN do very well without a brain is procrastinate.  I’ve always been a procrastinator.  My mother claims I didn’t get a birthmark until I was 6 years old----fishducky