Many years ago there was (alas, it is no more) an excellent restaurant on Wilshire Boulevard in Los Angeles.  It was called Perino’s.  It was the epitome of fine dining.  It was very near my husband’s law office.  He was a regular there.  They knew him by name & the parking lot attendants never bothered to give him a parking ticket—they recognized Mr. F------ & his Buick.  This was back when Cadillac’s had tail fins.  The attendants would line up all the fins in a row, visible from the street, & next to them would be Bud’s Buick.  I would join him there whenever it was possible.
Eating there was not cheap.  My mother-in-law was arranging a luncheon for a coworker who was about to retire.  She called Perino’s & asked if they could give her an approximate cost for about 30 people.  She was told, “Madam, we are not interested in people who are interested in price.  Goodbye.”  (I thought that was totally out of character.  They were always very nice to me.)

The food was always first rate--& very fresh.  I don’t believe they had a freezer.  If some food wasn’t available at the produce market in the morning, they simply didn’t offer it that day.  One evening we were there for dinner.  I was reading the menu & couldn’t decide what I wanted.  Harvey, the maître d’, said, “Mrs. F------, just tell me what you’d like.  I’ll have the chef make it for you.”  I told him I’d like Veal Oscar.  (That’s a veal cutlet with shelled crab legs & asparagus on top, with a dab of béarnaise sauce.  Yummy!!)  Harvey went in the kitchen & came back to our table.  He said that the chef didn’t know what Veal Oscar was, but that it would be no problem to prepare if I could explain it to him.  I did, & it was the BEST I ever had—made to my exact specifications!
Bud’s clients would often take him to lunch there.  I asked one why & was told that it was the only way he knew how to get Bud’s uninterrupted time & a fantastic meal for less than my husband’s hourly fees.  One day Bud called me & he couldn’t stop laughing.  He told me he had just had lunch at Perino’s with some clients.  One of them was saying that it just wasn’t fair.  HE always got a ticket from the parking attendants.  HE always picked up the check.  The maître d’ didn’t know HIS name.  Harvey then came to their table, telephone in hand.  He said he was sorry to interrupt, but there was an urgent call for Mr. F------.  Bud answered the phone, laughed & handed it to his complaining client.  It was for him.  It seems the caller wanted to be sure he would be able to reach him, so he had asked to speak to “the gentleman at Mr. F------’s table.”
Talk about class: My friends picked me up & we drove to Perino’s to meet Bud for dinner.  By the time we got there I had developed a headache, so I discretely asked Harvey if he had any aspirin.  He said he did & brought me an aspirin bottle wrapped in a linen napkin.  He peeled back the napkin to show me the label on the bottle, as if it were Dom Perignon.  I could almost hear Harvey saying, “Bayer, ‘61.  Will that be satisfactory?”

We weren’t always able to live on that lovely scale.  When we got married Bud had about $200.00 & I had the huge sum of about $500.00.  (I think he might have married me for my money.)  We lived in a TINY one bedroom apartment & I worked while Bud was in law school.  Our “dining room” table (in the living room—there was no dining room) was a small drop-leaf that my handy husband made from an old bedboard.  When fully opened, it seated 4.  We had a brown & white tweed sofa, which he sat on while he studied.  He spilled a bottle of ink on it (this was before ballpoint pens) & cleaned it with soap & water.  This left a clean spot in the middle of the sofa & made the rest of it look very dirty.  No way could we afford to have it cleaned, so we did the next best thing.  Each evening when we got home, we would wipe our shoes on the “clean spot” until it blended in & the whole sofa looked like new again. 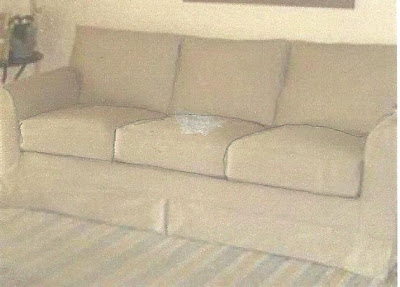 *William Inge wrote the hit play, “Come Back, Little Sheba” in 1952.  If you weren’t so young, I wouldn’t have to explain these things to you.