Can you be quettish all by yourself or do you have to be coquettish?  If you can deplane or detrain, why can't you decopter or deship?  If you don't really care any more, will you argue lentlessly?  If you follow all the rules of good behavior, are you corrigible?  If there are two of you in the world, wouldn't you be bique instead of uni?  If you enroll in a class & then leave, why haven't you exrolled?  If a truce is called to a conflict, are the parties now merely flicted?  If you're not inane, inept or decrepit, why aren't you ane, ept or crepit?  If something makes sense, is it a sequitur?  Why do "flammable" & "inflammable" & "ravel" & "unravel" mean the same thing?  Isn't that a waste of words?  If you think about something & then decide it's correct, haven't you come to a proclusion instead of a con? Is it possible to be totally partial? And I didn’t even get to the suffixes!  Don't worry if you can't answer these questions. We can't ALL be brilliant! 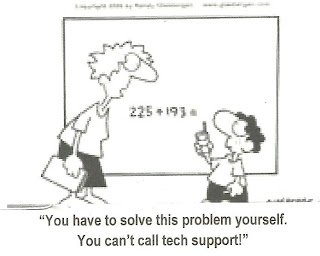 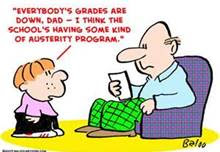 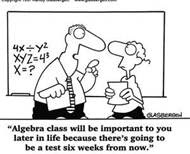 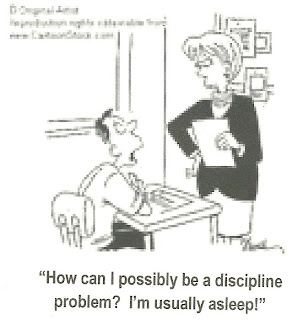 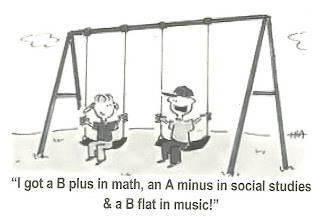 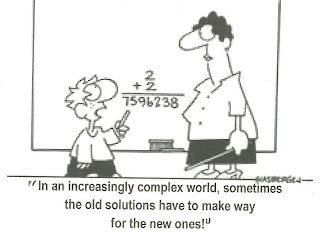 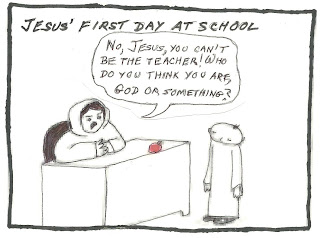 A mom & dad were worried about their son not wanting to learn math at the public school he was in, so they decided to send him to a strict Catholic school even though they were not of that faith.  After the first day of school, their son comes racing into the house, goes straight into his room & slams the door shut. Mom & dad are a little worried about this  & go to his room to see if he is okay. They find him sitting at his desk doing his homework. The boy keeps doing that for the rest of the year. At the end of the year the son brings home his report card & gives it to his mom & dad. Looking at it they see an A+ under math.  Mom & dad are very happy & ask the son, "What changed your mind about learning math?" The son looked his folks & said, "Well, on the first day when I walked into the classroom, I saw a guy nailed to the plus sign at the back of the room behind the teacher's desk & I knew they meant business."
____________________
A school teacher injured his back & had to wear a plaster cast around the upper part of his body. He wore it under his shirt & it was not noticeable at all. On the first day of the term, still with the cast under his shirt, he found himself assigned to the toughest class in the school. Walking confidently into the rowdy classroom, he opened the window as wide as possible & then busied himself with desk work. The classroom became a bit unruly & he admonished them. This happened several times. While working at his desk, the strong breeze from the window made his tie flap annoyingly. He kept rearranging & rearranging the tie as the class become more & more unmanageable. Finally, becoming disgusted with the wayward tie, he stood up & took a big stapler off his desk & stapled the tie to his chest in several places. Discipline was not a problem from that day on.
____________________
A little girl came home from school &  said to her mother, "Mommy, today in school I was punished for something that I didn't do." The mother exclaimed, "But that's terrible! I'm going to have a talk with your teacher about this ... by the way, what was it that you didn't do?" The little girl replied, "My homework."
____________________

If you are not sympathetic, empathetic or apathetic, you’re probably just pathetic----fishducky