(This post originally appeared in August, 2012, before I even started putting cartoons in.)

Google is playing with my fonts again.

Are you familiar with the “Six Degrees of Separation” thing?  This is Wikipedia’s definition: “Six degrees of separation refers to the idea that everyone is on average approximately six steps away, by way of introduction, from any other person on Earth…”   Do you remember David Janssen, who starred in “The Fugitive” on 60’s TV?  He was a very close relative of mine.  Allow me to explain.  I am married to Bud.  Bud’s late sister was Jackie.  Jackie was married to Ben.  Ben’s nephew was Stan.  Stan was married to Teri.  So what?  Let me finish.  Teri’s brother was David Janssen.  Count ‘em—exactly SIX degrees!! 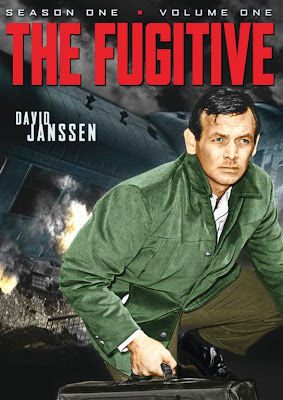 Side note on David’s family:  He was destined to become “movie star” handsome.  His mother, Berniece, was a one-time Miss Nebraska.  His sister, Teri, was Miss California & Jill, the baby of the family, was Miss Teenage California.
We were friends with Teri & Stan.  They once drove Bud & me to David’s home so we could meet him & have lunch.  He took us to the restaurant in his Rolls—the first time I had ever been in one.  This little hick—which I was at the time—was impressed!  I remember Dick Martin (of Laugh In’s Rowan & Martin) stopped at our table to say hello.  He made some dumb joke about a one armed man in the lobby who was asking for David.
We used to play golf with our old bank manager, John.  One of John’s friends was Barney Martin, who would occasionally join us.  You probably don’t recognize his name, but I’m sure you’d know his face.  He played Liza Minnelli's father in the movie “Arthur” & was Jerry Seinfeld’s father, Morty, on TV.  He was a sweetheart.

We were never formally introduced, but Carol Channing & I were in the same doctor’s waiting room & we visited for about 15 minutes.  I’m sure she remembers it to this day.

Way, way back in the beginning of time 1980’s, Bud & I stayed at the Pritikin Institute (a health & weight loss center in Santa Monica) for a few weeks.  We met & became friendly with Lorne Greene, another guest.  He played Ben Cartwright, the father, on “Bonanza”.  We used to jog with him & usually shared a table at mealtime. 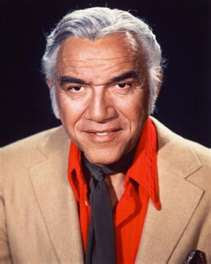 There were two other people with whom we also became close.  They were Lou Simon (whose son, Paul, was the SIMON of SIMON & GARFUNKEL) & Lou’s lifelong best friend, Al.  “The Odd Couple” could have been patterned after them.  Lou was very quiet & unassuming.  He had been an English professor at NYCC.  He told us the only “English professor joke” I’ve ever heard.  This is it:
A tourist gets into a cab in Boston.  He tells the driver this is his first trip there & asks where he thinks he should go.  The cabbie suggests some historical spots, museums, galleries, etc.  The tourist thinks for a minute & says, “You know what I’d really like?  I’ve always wanted to get scrod!!”  The driver sits there in awe—he doesn’t say anything.  The tourist says, “This can’t be the first time you’ve ever heard that request!” & the cabbie says, “No, a lot of men ask for that.  It’s just that this is the first time anyone has ever asked for it in the past pluperfect!!” 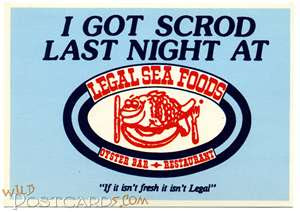 For those of you who don't know,
scrod is a type of fish, popular in Boston.

Lou went to return a phone call one day after lunch.  He was gone only a minute or so.  Al asked him who he had talked to so quickly.  He said that it was some guy offering him a way of making his stock portfolio grow to a million dollars.  Lou said that he told him, “I’ve already got a million dollars!!” & hung up.
Lou was bald.  One of his young grandsons once asked him why he didn’t have any hair on his head.  He told him he DID have hair.  He said he just kept it on the inside so it wouldn’t get wet when it rained.  It always amazes me what you can convince little kids is true.
Al, on the other hand, was very outgoing & loud.  He told us about a time he was on vacation with his wife, I think in New York.  They were at a luxury hotel, checking in.  (This was before Women’s Lib.)  He thought his wife was being too pushy while she was talking to the desk clerk.  He loosened his belt & dropped his pants, right in the lobby. He asked her loudly, “You want to wear the pants in this family?  HERE THEY ARE!!”
In high school, Lou’s son, Paul Simon, was having trouble deciding whether or not to go to college.  It would be expensive—he wasn’t sure if he could afford it--& he knew he wanted to have a career in music.  Al offered to pay for his education.  He said, “Sure, you play the guitar nice, Paul, but what are you going to do for a living?”
Al asked Bud if it would be all right for him to give me a diamond pin.  (At least, that’s what we THOUGHT he said.)  Bud said, “Sure!!”  This is what I got:

I don’t know whether Paul ever went to college or not—we never met him-- but he & Art Garfunkel did all right for themselves, anyway.  Here’s one of their MANY hits: