FISHDUCKY; THE DUCK, THE MYTH, THE LEGEND, PART 2

"TODAY’S TOPIC MAY  BE THE TELEPHONE, BUT I DON’T KNOW FOR SURE"

(This is one of a series of my earliest & most popular posts.  This was originally published November, 2012.  As always, all the cartoons are new.)
My husband was home with the kids while I went shopping.  There was one particular client he was trying to avoid.  The phone rang & since he thought it probably was this client, he told our 5 or 6 year old daughter to answer it.  It was.  He mouthed to her that he wasn’t home.  She told the client, “My daddy’s not home.”  There was a small pause & she said, “Just a minute.”  She turned to Bud & loudly asked, “When will you be home, Daddy?”

Signs of the times:

I was very close to my grandmother.  My husband answered the phone one evening & his side of the conversation went like this: “Hello.  When?  Yes.  Yes.  OK.  I’ll talk to you later.”  (This kind of conversation was not unusual.  He was an attorney & many things had to be kept private.)  He hung up the phone & I said to him, “My grandmother died.”  He told me that had been my dad calling to tell us just that.  She was old, but had not been sick--it was very sudden.

Slightly off the topic: I was helping out in Bud’s office, answering the phone when the receptionist was sick.  There was a small chalkboard above her desk for important notices.  One of the clerks had taken the bar exam & I was told that he had just gotten word that he had passed it.  I wrote on the chalkboard, “Lenny passed!”  I apparently should have said, “Lenny passed THE BAR!”  Some of the office staff thought he had died.

WAY off the topic, but still dealing with communication: As many of you know, Bud & I have been married for 62 years.  (If you use his system of counting, it’s 124 years--62 each.)  Even though I’m fascinating, he sometimes seems to ignore me when I talk to him.  Not so.  After all these years we have developed our own private language.  In response, he can either just sit there,   belch or fart.  I can then interpret his action (or inaction) as meaning, “That is the most amusing/interesting/informative thing I’ve ever heard.  Thank you for sharing it with me!!”  (We feel it’s important to keep our lines of communication open.)

I don’t know who thought of this, but I do know they’re my kind of people.  Some company (I can’t remember which) had an 800 number which was answered by a machine offering you a menu to reach the extension you wanted.  It said to press 1 through 7 to reach different departments.  Nothing unusual, right?  Well, not until it said, “To hear a duck quack, press 8.”  I did, & that’s exactly what I heard!!  The company had absolutely nothing to do with ducks.  Someone just had a sense of humor--& didn’t want to waste option #8. I must have called them 50 times!! 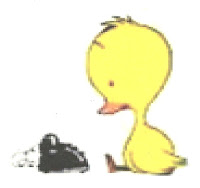 For the funniest prank call I've ever heard, click here.

Respond as you see fit----fishducky

PS: (From Barbara)  Women are like phones.  They like to be held, talked to & touched often—but push the wrong button & your ass is disconnected!!