IS YOUR MOTHER WEARING RED & OTHER STORIES

I don’t know if it’s just here in the L.A. area or not, but I’ve noticed that the female weather reporters on the local stations are getting sexier.  They are certainly dressing sexier.  My husband & I now refer to them as the “Weather Sluts”.  There used to be a bridal shop next door to a café we frequented for breakfast.  Their wedding gowns were OK, but we saw a red satin dress we couldn’t believe.  So tacky!!  We figured it was for the Mother of the Slut.

Our son took us, his family & his in-laws to the Cayman Islands & we visited Sting Ray City.  In this area, the water is calm, clear as glass & about waist high.  You stand in the water surrounded by hundreds of sting rays.  (Yes, it was a sting ray that killed Steve Irwin, the Crocodile Hunter.  He got stung in the heart.)  These were very docile & as long as you didn’t get them excited you were perfectly safe. They’re used to human contact & associate it pleasantly with food.  It was a weird feeling to have them swim through & brush against your legs!  You could even pick them up (they feel like a wetsuit) as long as you used both hands & held them on your lower arms like a heavy tray.  Did you know their faces are on the bottom of their heads?  We went snorkeling later in a different part of the Caymans.  I’d never seen so many beautifully colored fish.  What a wonderful trip that was!! 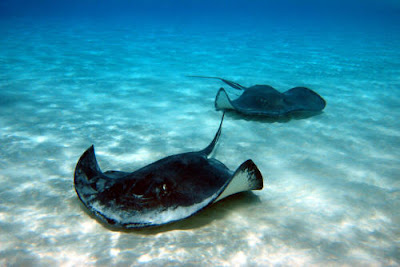 Everyone later decided they wanted to go snorkeling.  I had never snorkeled before & I had never completely gotten over my fear of the water (I had almost drowned when I was about 3).  I wasn't going to go in, but the (cute) skipper said he'd hold my hand.  I finally agreed to try it & over the edge of the boat we went.  I was (almost) completely comfortable & insisted he let go of my hand.  It was absolutely beautiful; the fish were gorgeous!!  I was so glad I changed my mind.

Bud & I were at Crater Lake, in Oregon.  It’s in the caldera of an extinct volcano & when it’s not ruffled by wind, the water’s surface is like a mirror.  It is a stunning sight.  The roads had been cleared of snow the day before we went.  We were standing by ourselves looking at the gorgeous lake when I said to Bud, “I wonder how deep the snow is?”  All of a sudden a shovel pops up not two feet from us & the voice of a ranger comes from an unnoticed hole in the snow & says, “This deep!!” 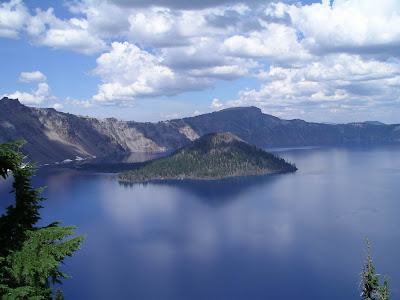 My grandmother absolutely adored Bud.  The two of us were at her house for dinner one night & she had put a tablecloth on her Formica table.  I said that I had been eating there for years & I NEVER saw a cloth on that table.  She told me sternly it was NOT for me.  I pouted & said, “Bubby, you used to like me” & she said, “You used to be my granddaughter.”  I asked, “What am I now?”  She put her hand on Bud’s shoulder, smiled & said, “Now you’re HIS wife!”  I could swear I heard the word “HIS” in capital letters--& with harps playing!  More “Bubbyisms”: She always used to say, “forth & back”, never “back & forth”.  I guess she figured (& rightly so) you had to get there before you could return. Maxwell House ran an ad campaign announcing their instant coffee was made with “coffee buds”.  She wouldn’t drink it—she thought they said “coffee bugs”.  The Yiddish diminutive of a name is made by putting “ela” on the end—Jack would be Jackela.  I met a girl named Pamela & brought her to meet Bubby.  She asked, “What am I supposed to call her—Pamelaela?”  When I was growing up she had a little bird that talked.   Like my grandmother, the bird had a Yiddish accent.
When Sizzler Restaurants first opened, they didn’t have waiters.  You picked up your own food & brought it to your table.  I used to go there fairly often for dinner with the kids if my husband was working late.  Normally, they had no problem in getting our orders correct.  This particular night was another story.  I have 3 children & 2 of their orders were wrong.  I didn’t find out the second was wrong until I returned to the table with the first corrected order, so back I went.  I came back to discover that mine was wrong, too!  I didn’t have either the energy or the patience to make a third trip, so I asked my then 8 year old son, who had finished his meal, to do it for me.  I waited, in my red pants-suited splendor, for him to return. When he did, he told me the cook asked him, “Is your mother wearing red?” 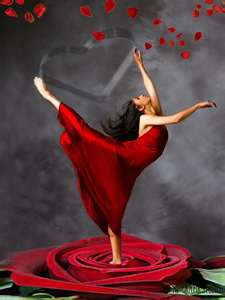 Yes, this is me.  Why did you even have to ask?