BET YOU DIDN'T KNOW THESE THINGS ABOUT QUEEN ELIZABETH

On June 2, 1953, Queen Elizabeth II officially took the crown after the passing of her father, King George VI. Just 25 at the time of her coronation, Elizabeth is now the longest-reigning British monarch in history. Here are more incredible facts about the 93-year-old Queen of the Commonwealth...

She was in Kenya When She Became Queen. 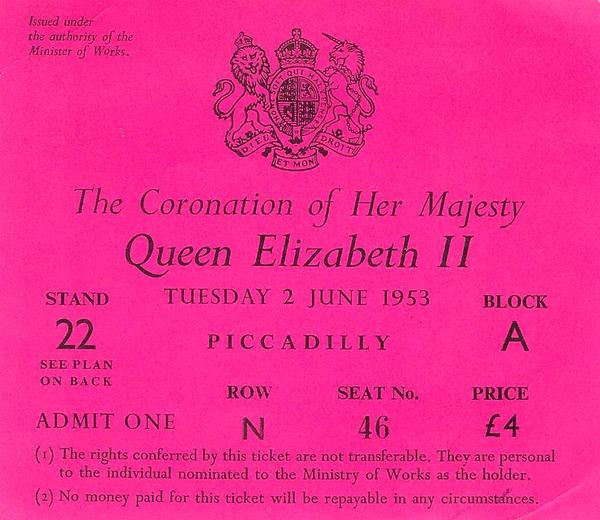 Copy of an actual ticket to Queen Elizabeth II's coronation ceremony in 1953. Image source: WikiCommonsAt the time of her father's passing, Elizabeth was with her new husband in Kenya. The two had made a pit stop there on their way to Australia and New Zealand and had just returned home from a night on the town when word arrived of George's death. Phillip broke the news to the new young queen, and the royal party quickly returned to London where they immediately moved into Buckingham Palace. Though her coronation ceremony wouldn't occur for several more months, Queen Elizabeth II had begun her epic reign that spans all the way to today.


She's 92-years-old and Still Has a Drink Before, During, and After Lunch Every Day.The Queen is said to be quite the fan of gin and is known to have a cocktail of gin and fortified wine (with a slice of lemon) before lunch every day. Then, she drinks wine with lunch, a martini in the afternoon, and has a glass of champagne in the evening. At 92-years-old, why not get a little loose?


Prince Phillip Isn't the Only Man Who Has Been in Her Bedroom.In 1982, a man named Michael Fagen snuck into Buckingham Palace not once, but twice in the same month. It was on his second adventure that he managed to sneak into Elizabeth's bedroom where he found her in her nightie. The original story was that the Queen kept her cool and ended up having a long conversation with Fagen before security came and apprehended him, but Fagen remembers it differently: he claims she scurried past him barefoot without saying a word. The Queen's head of security offered his resignation as a result of the break-in, but she graciously declined the offer and asked him to stay on. 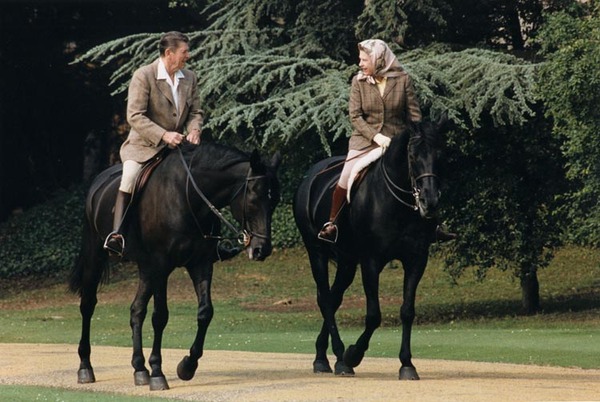 Queen Elizabeth with President Ronald Reagan. Image source: WikiCommonsElizabeth has long been a fan of travel. She first visited the United States before she ascended to the throne while Harry Truman was President and throughout her time as queen, has gone on 256 official state visits to 116 different countries. And she's only slowed down slightly in her old age—she visited 43 new countries after turning 50 and has made recent visits to Germany, France, Ireland, and Italy.

This story about her & President Reagan is making the rounds.  I wonder if it’s it true.

The Queen decides she wants a Kentucky thoroughbred in the royal stable, so she calls President Reagan, who decides to meet her in Lexington, Kentucky.  When they get there, they decide to go for a ride.

They're just pulling out of the barn when the Queen's horse's tail goes up and "Lbbttt!"--out comes a monstrous fart.  The Queen says, "I'm so embarrassed!!"  Reagan says, "You shouldn't be!! I thought it was the horse!!"


She Brings Her Own Toilet Paper on the Road.Despite being an experienced traveler, The Queen doesn't pack light. In addition to dozens of outfits, her own food and water, and even a personal supply of blood that matches her type, Elizabeth brings her own toilet paper wherever she goes. You can recognize it by the special seal holding each fresh roll together—only Phillip or The Queen herself are allowed to break it.
(triviatoday.com)

I understand that she has an employee whose sole job is to pull her chair into or out from under the dining table when she wishes to be seated or stand up.  I further understand that once, at a state dinner, she stood & then leaned forward to speak to a guest.  He had already pulled out her chair when she decided to sit down again.  He failed to read her mind & she sat down--on a chair that wasn’t there!  Her Royal Bottom (or “bum” as they say on her side of the pond) came in contact with the floor.  Bud plays these little jokes on me all the time.  Please do NOT tell me this is not true.  I like the story & will continue to believe it.

I have it on very good authority (digitaljournal.com) that her grandsons, William & Harry, once changed the outgoing message on her phone to say, “Hey, wassup?” & that they also put this message on her personal answering machine: “This is Liz.  Sorry I’m away from the throne.  For a hotline to Philip, press one.  For Charles, press two.  And for the corgis, press three.”  This is why I’m reluctant to have my grandchildren touch my cell phone. 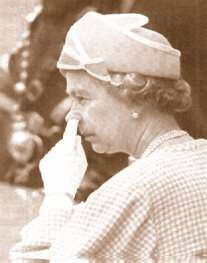 I thought the proper etiquette
was to remove one’s glove first.

Glad you enjoyed it, Your Highness----fishducky