COME WITH ME TO THE CASBAH—OR NOT!

Thirty odd years ago (granted, some years have been odder than others!) my husband & I flew to Italy to visit our daughter & our niece, who were roommates there.  We thought  it would be fun to go to the Costa Del Sol in Spain, where we had never been, for week or so of rest & sun before coming home.  It was so beautiful & relaxing there we decided to fly the girls over to join us.  We had a rental car & were on our way to the airport to pick them up when we stopped for a traffic signal.  THEN ALL HELL BROKE LOOSE!  What seemed to be hundreds of college students ran into the intersection, blocking it & carrying signs & chanting slogans.  My Spanish is passable, not great, but it was impossible to understand what they were trying to say. (It’s pretty hard to understand what a riot mob is yelling even if it’s in your native language.)  I even thought it might be “Death to the Americans!”  They started rocking cars & since we were 3 cars back from the signal with cars behind us & in the left lane with a foot high concrete traffic divider next to us, we were stuck.  Then the riot police came with their shields & masks.  It looked like the students were going to win this battle.  It scared the “mierda” (Spanish for s**t—see, I DO speak some Spanish!) out of us.  The driver in front of us had apparently had enough, flipped a U turn over the divider & left.  Not being entirely stupid, we followed.  I can’t remember whether we eventually made it to the airport or went back to the hotel & had them send a car for the girls.  We later found out the reason for the riot.  It seems that some student refused to pay his electric bill, so the nasty old company shut his power off.  That just didn’t seem right to “los otros estudiantes”


One day (before the riot) we took a side trip to the Casbah.  Charles Boyer (Ask your parents who he was.  It’s pronounced boy-eh.) is said to have used the sexy come-on, “Come with me to the Casbah” in a movie.  So did the amorous cartoon skunk, Pepe Lepew. 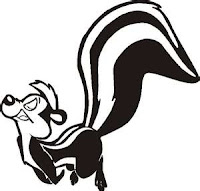 Can you tell which is which?

The Casbah is in an old section of Algiers & is a marketplace.  We boarded a ferry in Spain, passed the Rock of Gibraltar & disembarked in Algeria.  Our tour driver stopped en route so that those of us who wanted to ride a camel could do so.  How could I pass up such an opportunity?  Camels are TALL!  When you are in the saddle, you’re about 6 or 7 feet off the ground.  For you to get in the saddle, the driver has the camel “sit”.  The camel puts his rump on the ground with his forelegs straight & his back at about a 45 degree angle.  I got on & the driver led the camel by the reins.  We were walking, with Bud beside us, when he turned to Bud, held his hand out & said, “You geeve me teep!”  Bud is a very generous tipper, but he doesn’t like to be ordered to do it.  He said, “No.”  The driver started walking faster--& so did my camel-- & I.  Again, “You geeve me teep!”  Again, “No.”  Again, faster.  A couple more times of this & I leaned toward Bud & said, “You geeve heem teep!!!”  He did. 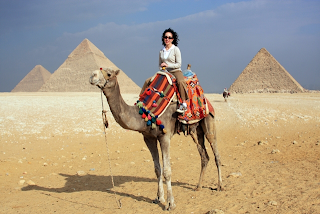 This is not me—I just wanted to give
you an idea of how tall camels are.


The Casbah itself was a filthy place with sand & dust everywhere.  Meat was for sale & the hanging pieces were swarming with flies.  There were jewelry & clothes offered & a fez vendor followed us, trying to sell Bud a hat, which he DID NOT WANT.  The man offered Bud a fez for $10.00.  Then he offered him 2 fezzes for $10.00.  Then 1 for $5.00. Then 2 for $5.00.  Ad infinitum.  We DID get to see people weaving Arabian carpets, but they didn’t have any that flew.  We were so impressed (NOT!) by the place that we felt that if there was a contest where first prize was a night at the Casbah, the second prize would have been 2 nights! 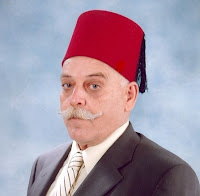 Even if Charles Boyer asks you, don’t go----fishducky