For those of you who aren’t members of my tribe (Jews), let me translate.  I don’t think there’s an English word for the relationship between the parents of a child & the parents of that child’s spouse.  In Yiddish, the two sets of parents would be “machatunim”.  In Spanish, it would be "consegueros".  And in the case of my son’s in-laws & us, another word would be “friends”.  I am grateful.  This doesn’t happen nearly often enough.

I’d like to tell you about Matt’s father-in-law, John.  He used to fly airplanes in the Navy, taking off from & landing on aircraft carriers.  He also worked as a Navy paramedic & he became a civilian paramedic after his discharge.  (I once asked him why a regular fire truck always accompanies the paramedics.  He said that was in case the victim suddenly catches on fire.  He MAY have been kidding.)  When that career ended he became a consultant for large corporations, helping them to design buildings that would keep their workers safe & to help them in case of an emergency.  He became very well known in this field.  Once, when he was having a problem finding a solution to a safety problem, he asked me to design a baseball cap for him to give out to the people working with him.  What he wanted--& got—was a squirrel wearing dark glasses & swinging a cane, like a golf club, at an acorn on a tee, with the words BLIND SQUIRREL GOLF & COUNTRY CLUB.  (Even a blind squirrel finds an acorn sometimes.) 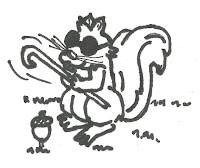 More importantly, I’d like to tell you what he was like, as a MAN.  He was (again, a Yiddish word) a “mensch”.  That translates, literally, to “person” but it is used to describe someone who is warm, friendly & really cares for his fellow man.  John was all that.
He liked to run & ride bikes.  His wife is allergic to dogs, so they couldn’t own one themselves.  John would “borrow” a neighbor’s dog & take it running with him.  He was fun to be with.  When our kids got married in a formal ceremony at an upscale hotel, John & I were going to put a live shark in the pool.  He realized his wife wouldn’t think it was as funny as we did, so we settled on presenting the newlyweds with an inflatable one on a silver tray at their reception.  He loved to fly.  One Christmas I had a neon sign made for his home office.  It had a small plane on it & said FLYING LESSONS 10 CENTS.
Our kids live in Connecticut & we both live in California, but we all get together for Christmas every year.  On their 25th anniversary (in December) John & his wife, Jeanne, flew down to Los Angeles a couple of days before the kids got here so we could celebrate their happy day with them.  Sometimes we would all meet in another city to spend the holidays. When we were in Phoenix, he talked a pilot friend into letting me operate a flight simulator.  I (virtually) crashed!  When we were in San Diego, he rented a plane & flew the 20 of us around the area, 3 of us non-pilot passengers at a time in a 4 seater plane.   He had caps made for everyone with our last name, his last name & the words “FLIGHT CREW”. 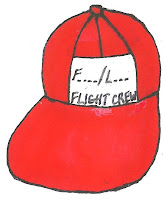 John died in 2006.  His was the only military funeral I’ve ever been to.  I thought I was holding myself together pretty well, even during the 21 gun salute, but when the bugler played “Taps”, I lost it.  I could almost hear John whispering in my ear, “Enough of this sad stuff.  Let’s go have lunch.”

One added note—do you believe in Karma?  When John died, my daughter-in-law immediately flew out from Connecticut to California be with her mother.  My son & their 2 kids followed in a day or two.  The plane reservations were obviously last minute & they couldn’t get 3 seats together.  They were seated directly behind one another.  Matt asked the man sitting next to Brian, who was 8, to change seats with him.  He explained that Brian was very young & was taking this cross country flight to go his first funeral—his grandfather’s.  The man refused.  During the flight, Brian threw up on him.  When we heard, we all congratulated him on his excellent aim.
I miss you, John----fishducky