DEAR DR. FISHDUCKY, I HAVE A PROBLEM…


IMPORTANT (TO ME, ANYWAY) NOTICE:
Starting this week (September 26, 2012) I will be posting 3 times a week--Monday, Wednesday & Friday until further notice!!  Thank you for noticing this notice.

Before we start, allow me to give you
some general medical advice:

A married couple, in their 50’s, are discussing the wife’s checkup visit at the doctor’s.  She tells him the doctor said she was in amazing shape.  She says, “He told me I had the smooth skin, perky breasts & flat stomach of a 20 year old.”  Her husband asks her, “What did he say about your 50 year old ass?”  She says, “Your name never came up!”
Whatever you do, avoid a hospital stay (if you’re conscious)!!!  Set your own leg or remove your own appendix, if possible.  Most hospitals refuse to accept the fact that you’re a human being & have likes & dislikes.  You will be the gallbladder in Room 317 or the abscess in Room 249.  An example:
Alan King, a comedian who was popular in my lifetime, but after dinosaurs, was a hospital patient.  A nurse (you know the kind--“How are WE today?”) would come in every morning to take his temperature.  She’d bring him a glass of apple juice & a sterile cup for a urine specimen.  She’d ask him what kind of juice he wanted the next day.  It didn’t matter what he told her—she’d ALWAYS bring him apple juice.  HE HATED APPLE JUICE!  One day, when her back was turned, he poured the apple juice into the urine cup.  She picked it up, held it to the light & said, “We look a little cloudy today.”  He grabbed it from her, took a look & said, “You’re right—we’d better run it through again!”--& drank it!!  He said it was worth drinking the apple juice just to see her run out of the room screaming!
A word of warning—if you are a stereotypical blond,
be very careful if you have acupuncture!! 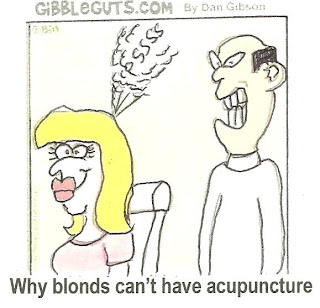 
Fried foods are good for you, provided they are fried in vegetable oil & soak up lots of nutrients.  An extra-greasy donut would count as one serving of bread & two servings of vegetables.


Avoid exercise at all costs!!  If it makes your stomach smaller, imagine what it would do to your brain!


Even if all your pill bottles look alike, there’s still an easy way to tell which one is the PMS medicine.  It’s the one with the bite marks on the top.

There are fine doctors all over the world.
For example, this specialist in Italy:

On the off-chance that I didn’t answer all of your medical questions today, let’s move on to funerals, specifically mine.  I’ve told my husband that I didn’t want a regular funeral, with everybody sad.  Instead, I told him that I wanted fireworks to celebrate my life.  He said that fireworks weren’t his thing & offered a compromise—he said he would be willing to stick sparklers in my behind.  NOT ACCEPTABLE!!  I might be willing to settle for Maxine’s idea.

My wonderful friend, Inger, is posting a blog about my art work tomorrow.  You can catch it here!