DO YOU HAVE ANY MENTAL FLOSS? SOMETHING’S STUCK IN MY BRAIN 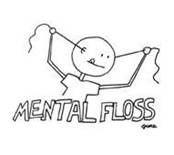 We bought a condo in Maui in 1975.  We had originally planned to retire there, but soon learned I was far too susceptible to “island fever”, i.e., the inability to move one’s ass when one is soooo comfortable in the sun.  An example:  I would lie on the beach & think, “I have to go potty.  Badly.  Right now!  I’ll just lie here another hour or so & then I’ll get up & go.”


Shortly after our purchase, Natalie (my sister-in-law) & her 3 girls came out to spend the summer with us.  Nat came back from a LONG day at the beach.  (She denies it, but Bud & I have seen her tanning her armpits & spreading her belly button open so it would get tan inside.)  She told us she had met the “nicest” couple on the beach, who also had a condo in our complex, & that we should go down the next day to meet them.  Natalie, who was at that time a bit of a prude but has since become a slut lovely modern lady, said, “I think they’re married, but I’m not sure.  It doesn’t matter, but I think they ARE married.  But I’m not sure.  But I think so.  But I’m not sure.”  I, of course, said, “Nat, if you want to know, I’ll ask them.”

Bud & I went to the beach the next day & met Jack & Jane.  Nat was right—they were VERY nice.  After visiting for a while, I said to Jane, “I want to ask you something that is absolutely none of my business.  I won’t be insulted if you don’t want to answer.  Actually, it’s my sister-in-law that wants to know.  Are you & Jack married?”  She laughed & said, “Oh, my God, NO!”

Jack & Jane ran their air conditioning constantly & it apparently couldn’t handle the stress.  One day Jack came out of the condo & said to Jane, “I didn’t even know you’d planted a crop, but it’s ready for harvest.”  Moisture must have been running out of the A/C vent because there were actual mushrooms growing in the carpet just below it.

Jane was an heiress of some sort & had beaucoup dollars.  One day she had a problem & asked for my attorney/accountant husband’s help in solving it.  She told him she had just received a disturbing letter from her bank.  To quote her precisely, “The bank said I’m UNDERDEPOSITED!”  It’s just that we’d never heard it phrased quite that way before.

They lived in Salt Lake City & though she was not a Mormon, she was obviously less than familiar with Jews & Jewish food.  She came to Los Angeles on business & I took her to Junior’s Delicatessen for lunch.  Our waitress served a bowl of chicken soup to the lady sitting in the next booth.  It contained a very large matzo ball.  Jane asked me, in all seriousness, “Why does that lady have a tennis ball in her soup?”

PS—Re the condo:  Small World Dept.  I was visiting with my new neighbors & one of them asked me where we lived when we weren’t in Hawaii.  I told her we lived in Los Angeles.  She said she had a sister there, told me her name & asked if we knew her.  (After all, there are only about 3,000,000 people in L. A.)  I said I didn’t know her & asked where she lived.  She told me.  Her sister lived EXACTLY one block from us!

Aloha!  I have to watch the humuhumunukunukuapua’a go swimming by----fishducky