In the early 70’s, Bud & I took a cruise to Puerto Vallarta, Mexico.  Our travelling companions were a brilliant, interesting & fun couple. Phyllis is a ranked bridge player--I think a grand master--& Bob was a psychiatrist.  I think one of the reasons Phyllis married him was because he was one of the few men who could beat her at chess.  Bob sported the shaved head look long before it became popular.  You’ll see in a minute why this is important for you to know.


We were in our cabin & I was showering in preparation for dinner.  Bud opened the door to the bathroom & asked me to come into the cabin.  I said I’d be out in a couple of minutes.  He said to please come out NOW & to be sure I was wearing my robe.  He was trying very hard not to laugh.  I had left my long “gypsy” wig on the bed along with my clothes while I was cleaning up.  Wigs were very popular at the time.  Everybody was wearing them.  Even more people were wearing them than I’d realized.  Bob was sitting there visiting with Bud, with my “gypsy” wig on his shaved head!  At least I looked better in it than he did.  (I think.)  Maybe because I wore it with big hoop earrings.

We stayed at a hotel on the beach.  We tried hard not to be “ugly Americans” & to speak as much Spanish as we could.  Bob really liked butter & at dinner, he always wanted more.  He would say to the waiter, “More mantequilla, por favor." We couldn’t understand why, if he could learn the word for butter—“mantequilla”— he couldn’t remember the much simpler word for more—“mas”.  He DID manage to master the emergency phrase, “Dos margaritas, por favor.  Uno con sal y uno sin sal.”  (“Two margaritas, please.  One with salt & one without salt.”)
Puerto Vallarta was just coming into being when we took our cruise.  When we were checking into the hotel, Bud asked the clerk if there were any messages for him.  The clerk asked, “On what, senor?”  The telephone--& I use the singular form—was a couple of miles away, in town.  Our friends had told us that we had to visit an artist there who did charming primitive paintings, sort of like a young Mexican Grandma Moses.  His name was Manuel Lepe Macedo—he signed his work “Lepe”.  He never attended art school—his only schooling was 4 years of primary education—but he was intelligent, personable & extremely talented.  We found him & bought 2 paintings.  One was $20.00 & the other was $40.00.  We really couldn’t afford the $60.00, but we fell in love with the paintings.  When we got home, Bud framed them himself & they’re still in those frames.

“The Night of the Iguana” (with Elizabeth Taylor & Richard Burton) had been filmed there a short time before.   Taylor & Burton bought a beach house & put a dozen or so of Lepe’s paintings there after our trip.  That started him on the road to success.  He died in 1984, when he was only 48.  Our $60.00 investment (which was not really an investment; we bought the paintings because we loved them) has increased in value.  It’s a shame that so many artists have to die before their talent is fully recognized.  His work now sells for upwards of $40,000.00—each!  Below are 2 of his paintings.  They’re not the ones we have, but they show his wonderful style. 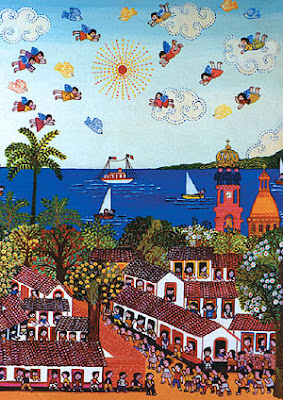 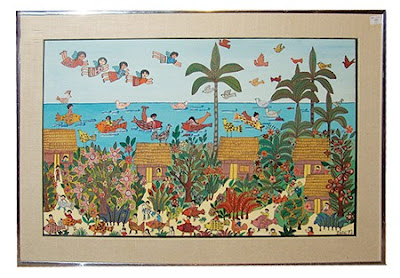