YOU WOULDN’T LIE TO A FISHDUCKY, WOULD YOU?

My mother-in-law, my father-in-law & my husband have all sworn that these things really happened.  Although I wasn’t there as a witness, I have no reason to doubt them.

My mother-in-law, Audrey, used to work at the Los Angeles County Courthouse.  She drove her car to work & parked in a lot on a hill & walked down a flight of stairs to get to the sidewalk.  She parked as close to the stairway as possible.  One day she got the very best space—right in front of the stairs!  She went to work & when she got back to the parking lot she found her car waiting for her.  NOT AT THE TOP OF THE STAIRS, BUT AT THE BOTTOM!  It had come down the stairs on its own.  She said she must have forgotten to set the parking brake, but I think it just got tired of waiting for her to come back.  Amazingly enough (to you, but not to those of us who knew Audrey) she got in & drove it home.  That was the last time she ever drove.  I guess she figured that wouldn’t happen on a bus.  This is not her car, but it might as well have been: 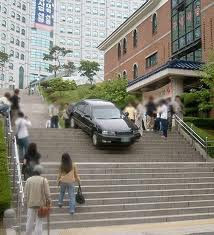 And from my favorite (& only) father-in-law, Phil; two stories.  He had a habit that really annoyed his wife.  He would spit out of the car window while driving.  One day, he released a wad & decided to quit doing that right then & there.  Perhaps the fact that the car window was still rolled up & became spit-covered had a hand in his decision.  He’s passed on now—we’ll never know for sure.

The other Phil story happened shortly before he gave up his driver’s license.  He was on a major street which fortunately had very light traffic at the time.  He had apparently been weaving & was stopped at a red light, I assume taking up a lane & a half, when a car full of young men pulled up alongside him.  The driver politely asked him, “Excuse me, sir, but could you please tell me what street this is?”  Phil answered, “Olympic Boulevard.”  The other driver thanked him & asked, “Would you mind sharing it with us?” 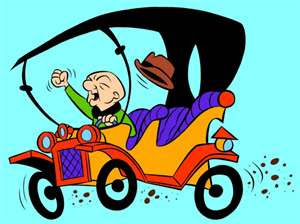 And now, my husband:  While in high school, Bud & another boy wanted to take Physics II but they hadn’t yet taken Physics I.  To do this, they needed a recommendation from another teacher.  I don’t know how they had acted in HIS class early in the semester, but the teacher’s recommendation they got included the sentence, “F------ & Merrifield were good boys THE SECOND 10 WEEKS.”

When Bud was in the Army he met John "Combat" "Nails" Ragan.  He got the name "Combat" by being the only one to go through 16 (instead of 8) weeks of basic training. "Nails" came from when he was found using the only "church key" can opener (before the days of pop top cans) to clean his fingernails.  Anyway, John was a passenger in a car & he had some letters to be mailed.  He yelled to the driver, "Stop here!"  He jumped out, mail in hand & ran up to a short, rather stout lady who was wearing a red blouse & blue slacks.  He looked at her & said, "Pardon me, madam, I thought you were a mailbox!" & got back in the car.  (You know even I couldn't make this stuff up!)

In law school Bud had to take a class that was held in a large lecture hall at 8:00 am on Saturdays.  This hour was apparently too much pressure for one student.  One Saturday at around 7:30 he hid in a janitor’s closet inside the lecture hall.  About 10 or 15 minutes after the class started, a loud alarm clock was heard ringing from inside the closet.  The pajama & robe clad student came out carrying the clock, a toothbrush, toothpaste & a towel.  He scratched himself & muttered, “These early Saturday classes are going to kill me” & walked out the lecture hall door into the hallway.  I guess the instructor understood & agreed, because when the student later came & apologized to him for interrupting the class he was told, in a stern voice, “Mr. Rudelson, that was very unmannerly, very unlawyerlike, very ungentlemanly, AND VERY FUNNY!!”

And because a Boy Scout would NEVER lie:

Happy End of the World!!

No names were changed to protect the innocent.  There were no innocent! ----fishducky