I'd much rather go barefoot than ever wear shoes.  I refuse to wear shoes unless it’s absolutely necessary.  I never wear them in the house.  When my kids were small & they’d see me wearing shoes, they’d ask where I was going.  I used to give small dinner fancy parties with crystal, china, sterling & bare feet.  I have broken several toes by bumping them into chairs.

A very good friend of Nameless was a talented cartoonist.  When they were in high school he drew cartoons all over a pair of her white tennis shoes.  Then, on the toes, he named the shoes.  The right one was "Alfred Lord Tennis-shoe" & the left was "Grou-shoe Marx".

I realize my feelings towards shoes makes me different from most women, but then again, so does my brain.  Even if I did love shoes, I probably would never wear these:

and, apparently, neither would he:

To see more weird (& even weirder) shoes, click HERE.
If you've had enough & just want to see some cartoons, just scroll down.

Do you have grave reservations about Halloween? 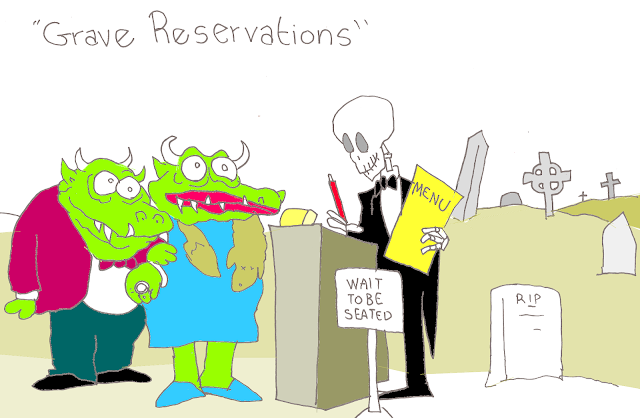 Need some ideas for last minute Halloween
costumes for your pet?
Click (LINK) then scroll way down to Pet Halloween Costumes.

Happy Halloween tomorrow!!  Remember, a skeleton is just a bunch of bones with the person scraped off----fishducky

My husband & I may be getting along in years, but...

stop that, Bud!  People are watching!

What I was going to say is that even though we're old there are some things we'll never forget. At least I won't because my mind is like a steel trap, or a sieve, or something like that. Whatever.  Here are some of my best memories:

When one of our granddaughters, Nameless III, was just under 2 years old, her mother & father brought her & her older sister to our beach condo.  While Bud, Nameless, Nameless II & I went for a swim she laid down on one of our twin beds for a nap.  Her daddy laid down on the other bed.  He woke up about a half hour later in a panic--Nameless III was gone!  He thought she might have fallen down the stairs or was wandering around alone outside.  Imagine his relief when he found her sitting peacefully at our breakfast table, happily devouring strawberries from a just-purchased flat that we had left on the table.  By the time he had found her, of course, she & the table & the chair she was sitting on were all bright red!!

Her older sister, Nameless II, was born near the beginning of July, so she was almost 1 1/2 years old when she came to our house one Christmas.  There were a bazillion or two gifts under the tree. (My family used to claim that if I gave someone a deck of cards I would wrap each one individually.  Probably a slight exaggeration.)  Anyway, she took one look at the tree & the gifts & her eyes grew huge.  She drew in a deep breath & said in a baby voice, "So MANY pwesents--ALL fo' me!!"

Matt was out here from Connecticut, staying with his brother Blake, when the 9/11 terrorist attack occurred. He had been scheduled to fly home that day.  As you'll remember, all planes were grounded after that for a week or so.  Matt's 6 year old daughter, Lisa, missed her daddy very much.  Her mom tried to explain to her why he couldn't get a plane home for a while.  Lisa asked her mother, "Why can't he just walk?"

When Lisa's brother, Brian, was between 1-1/2 & 3 he used to strip naked & run into the room where she was with her friends.  He just wanted hugs & kisses.  He's now 16 & his girlfriend won't let him do that anymore.

Nameless:
1. She talked very early, but not always too clearly.  One thing she loved & requested often for lunch was chicken noodle soup, only she called it "Hickey noo noo hoop".

2. You can see Century City from our front window.  When she was about 2, she was looking out the window one evening waiting for her daddy to come home. The hotel must have just installed those yellow bug lights on their balconies because she called me & said, in an awe-filled voice, "Mommy, the hotel turned to gold!"

3.  When she was in the 2nd or 3rd grade, Bud & I took a vacation & my folks moved into our house to care for our kids.  She was walking home from from school (it was normal for kids to do that then) & was very late.  My folks were worried.  When she finally got home, my dad asked her why she was so late.  She was logical even at that age; she said, "I took a long cut!"

4. She once asked what a homosexual was.  We weren’t sure how to explain this to an eight year old.  We told her that while most men love women, there were some men who loved other men.  We said this was the way God made them & it was fine.  We asked her if she understood & she said, “Yeah—you mean like a lesbian, only a man!”

Matt:
1. He hated to take showers when he was young.  He would often turn on the shower & sit in the bathroom for a while & then come out bone dry & just as dirty as when he went in.  Once, I made sure he actually got in the shower, which must have made him angry, because when he was through & I went into the bathroom to straighten up I found he had written the “F” word on the steamed up mirror.  He tried to, anyway.  He had put an “e” on the end.  FUCKE.  It looked like Shakespeare was swearing.  My problem, as a loving & helpful mother, was to decide which was more important—telling him not to use that kind of language or correcting his spelling?

Blake:
1. I was exhausted from having 3 children under the age of 6 to care for, so my sweet husband hired an au pair.  (Thank you. Bud!)  On her first night, she cleared the dinner dishes & brought in small bowls filled with water & a couple of slices of lemon.  Never having seen finger bowls before, Blake (our youngest) started crying.  I asked him what the matter was & he whined, "I don't want soup!"
2. We got emergency calls twice from his elementary school.  Once he fell UP the stairs & the other time he tried to hit another kid in the stomach, missed & got him in the belt buckle.  He broke his knuckle!

AND THEIR PARENTS (US):
When Bud & I were dating, his father, Phil, was the West Coast Studio Representative for the Musicians' Union.  As such, he had a pass to the Hollywood Palladium, a VERY fancy dance pavilion.  (See what Wikipedia has to say about it HERE.)  We used to go really often on his pass to dance to the big bands.  So often, in fact, that when Phil once tried to use his own pass to get in he was told that his signature didn't match!

Having an in with musicians worked out very well for us.  Si Zentner & Manny Klein & several others (whose names I can't remember) comprised our wedding orchestra. They each had their own orchestra but played together at our wedding.  If their names aren't familiar to you, may I present samples of their work:

And Manny:
For some reason, Blogger wouldn't accept this link,
but copy, paste & listen to it--it's great!!
It should be the first one on the page.
Youtube/AT SUNDOWN by Manny Klein 1946 JAZZ!!

So many kids, so many memories:

I actually used to belong to this group, NOT because I believed the earth was flat, but because I wanted their newsletter.  It was so removed from normalcy/sanity as to be

hilarious.  I eventually dropped my membership because I had no desire to give $5.00 or $10.00 a year (whatever it was) to an organization that had become extremely anti-Semitic.  I also used to subscribe to several of the "newspapers" that are at the check stand at the markets, including the Enquirer & the Wacky Weekly World News.  I actually had a reason for all this--let me explain:

When our kids were away at college, so were many of our nieces & nephews.  They were all over the U.S. &, for a while, our daughter Nameless & one of our nieces were in Italy.  In order to keep a family member up to date on what was happening to the rest of us, I acted as sort of a clearing house.  They would send me letters (this was WAY before email or cell phones) & I would put whatever information they gave me into a BIG letter.  I xeroxed it (remember that?) & put in stupid stories, jokes & my own thoughts & sent a copy to everyone every couple of weeks.  Now that I think of it, it was sort of an early version of this blog.  I mailed 15 or 20 copies.  My father-in-law lived about a half mile from us & we saw him often, but he insisted on his own copy, too, & so did my sister-in-law's father-in-law.  They thought they were funny & they didn't want to be left out.

Once we ran a contest for my readers.  Someone had given me a teddy bear, about 6" tall & made of mink.  We thought she should have a name so we offered a prize for the best name.  The prize was to be $500,000.00 or a cookie, at the discretion of the judges (me & Bud).  Nameless & her cousin were sharing an apartment in Italy & they came up with the winning name, "Theda Beara".  (Theda Bara was a sexy silent film star.) We went to Italy to deliver their prize.  It was a cookie, not the $500,000.00--we're generous, but we're not stupid!  I don't know if anyone still does it, but they used to make cookies the size of a pizza & decorate them.  We had them write "Congratulations!" on the cookie & they put it in a pizza-like box.  There was no problem getting it into the country, but their customs inspectors were curious as to why we were bringing a pizza (they thought!) into Italy.

Here's a sample of the letters & also of the cartoon section:

I went to a theatrical performance about puns. It was a play on words----fishducky