THE PHRASE, “FISHDUCKY’S BRAIN”, IS NOT AN OXYMORON!

My friend, Barbara, can’t handle food that’s too spicy.  We went out for breakfast to a place where we had eaten before.  Barbara wanted sausage--they offered both link & patty--& she remembered that one was spicier than the other, but she couldn’t remember which.  She asked the waitress the difference between the two sausages.  She was told that the link was long, like a cigar, & the patty was sort of like a hamburger.  Scary—this woman is allowed to drive, vote & reproduce!  Even scarier—she probably went home & told her family that she’d had some customers who were so stupid that they didn’t know the difference between link & patty sausage.
I am a right-brained person.  I am an artist, a writer (I hope) & foreign languages come fairly easily to me.  My husband, however, is left-brained.  He’s a lawyer & accountant & a very logical thinker.  (Do I hear anyone asking if that’s true, why did he marry me?)  That’s why, when someone claims that we don’t have a brain between us, we can truthfully tell them, “You’re wrong—we have ONE!!”
And now, off to other subjects—of course!  (I told you that I wasn’t logical.)
Blake was about 8 when we borrowed a station wagon & took our 3 & Bud’s sister’s 3 kids to Las Vegas, Bryce Canyon, Zion & the Grand Canyon.  That meant there were 8 of us at every meal.   It  always took 2 people to bring us our order.  One night a waitress brought our entire order on ONE tray.  We applauded!  A couple of days later, Blake was reminiscing.  He asked, “Do you remember when we gave that waitress the clap?”  (I have absolutely NO idea where he’d heard that term.)
In case you’re wondering why I use so many exclamation points when I write—I THINK in exclamation points!!!!!
I have a hat that is guaranteed against any contingency, even loss.  I’m wearing it here.  I will NEVER lose the guarantee. 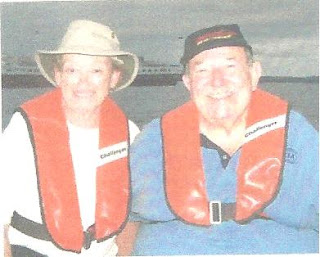 My father was the gentlest, kindest man I ever knew.  I only remember hearing him yell once.  At me!  He was teaching me to drive & I guess I came a teensy weensy bit too close to the cars that were parked.  He threw both arms back against the seat (as if readying for crucifixion) & shouted, “WHAT IN THE HELL DO YOU THINK YOU’RE DOING?”  I don’t know why he yelled—I didn’t hit anybody!

Men wake up as good looking as when they went to bed.  Women somehow deteriorate during the night----fishducky