MY MIND INACTION (No, there should NOT be a space between IN & ACTION )

I believe that you should always dress neatly & appropriately, regardless of the current fashion.  This point was strongly made by a gentleman (?) I saw on TV some time ago.  He & some of his associates were working (more specifically, robbing a casino in Las Vegas) & a part of his job consisted in jumping over a counter to get to the money.  His gang uniform consisted of shoes & socks, a bandanna, a shirt & pants that came all the way up (yes, UP!) to his butt.  While jumping the counter HIS PANTS FELL OFF!  This—probably the high point in his illustrious career—was captured by surveillance cameras.  I don’t think Yves St. Laurent would have approved.  (Sarcasm—just one more service I have to offer!)

"Loosen your belt a notch, Don
Your underwear's not showing."

“ Look at those dang fool teenagers, wearin’
their pants hangin’ down
low like a couple idiots!”

Never bite off more than you can chew—or pack more than you can carry.  Our daughter, then a teenager, was preparing to go to Europe with some friends.  She decided to put everything into one backpack.  She is 5’2” & slim & there was an awful lot in that backpack.  We told her that it was too heavy for her, but she disagreed. We helped her slide the straps over her shoulders.  She stood erect for a moment--& then fell over backwards!  She could NOT get up.  I had the feeling I had given birth to a turtle, which now lay helpless on its back.  She repacked.  (Note: My husband says some of my best memories never happened.  Our daughter claims this never happened, but my husband remembers it, too!)

When our son, Blake, was 5 or 6 he wanted his own library card.  We told him OK, but he would have to be able to print his own name on the application.  He practiced diligently for a few days & we took him to the library.  He printed B-l-a-k-e & the first four letters of our last name, then there was a long pause.  He looked up at me & asked, “How do you spell h?”

My friend, Barbara, & I had matching T-shirts. They had a picture of a hairdresser (a poodle) working on her customer (a cow) in her chair.  The thought bubble above the poodle said “COW!” & the cow was thinking “BITCH!”.  We sometimes still call each other by these names of endearment.

Kids Are So Honest Dept:  In 2000, we took our daughter, son-in-law & grandchildren to Washington, DC to see the 4th of July fireworks from the steps of the Lincoln Memorial.  MAGNIFICENT!!  We toured Washington & then went on to Philadelphia where we met up with one of our sons & his wife & children.  We were standing in line to see the Liberty Bell.  (I touched it!  You weren’t supposed to, but I couldn’t help myself.)  Our 4 grandchildren were between 2 & 8 years old at the time & not very good at standing in line, so I was constantly carrying one or another of them on my shoulders.  When we got to the front of the line I asked my 5 year old granddaughter how my hair looked.  I was kidding—I knew how bad my hair had to be after all those kids had their hands in it.  She looked at me & lovingly said, “It looks just like it always does, Grandma!” 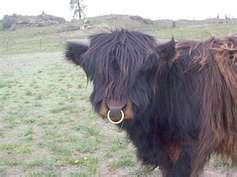 Bud’s parents & my parents celebrated their 50th anniversaries around the same time.  We wanted to give them VERY special gifts, so we bought them each a new car!  When we presented them with the keys (on 2 separate days) both my father & my father-in-law said the same thing—“You’re crazy!”  We were seeing a psychiatrist at the time & I asked him, “We gave my father a new car & he said we were crazy.  We gave my father-in-law a new car & he also said we were crazy.  What we want to know is, are we crazy?”  The psychiatrist said, “Of course you’re crazy!  Can I have a new car?”

This video doesn't really belong here.
I just like it.
HuffPost
That’s all for today----fishducky